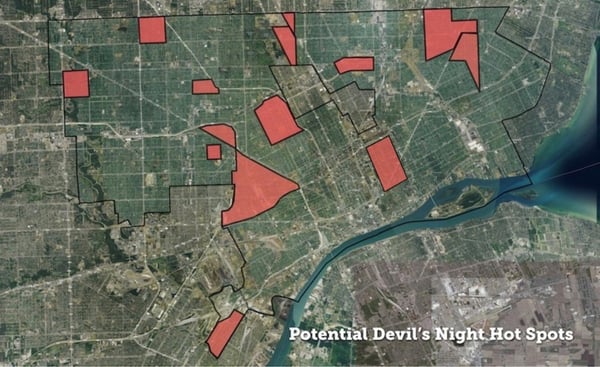 Loveland Technologies has assembled a citywide map to support this year's Angel's Night* efforts in Detroit. Hot spots experiencing higher rates of suspicious fires and arsons are identified, and we've included an analysis showing every occupied residential structure in the city with a publicly owned vacant structure touching any side of the occupied property.

Vacant properties adjacent to occupied homes are critical to note for three reasons:

Taken together, this indicates that vacant structures that fall within arson “hot spots” are at particular risk, and those adjacent to occupied homes within these areas warrant particular attention on Angel’s Night. 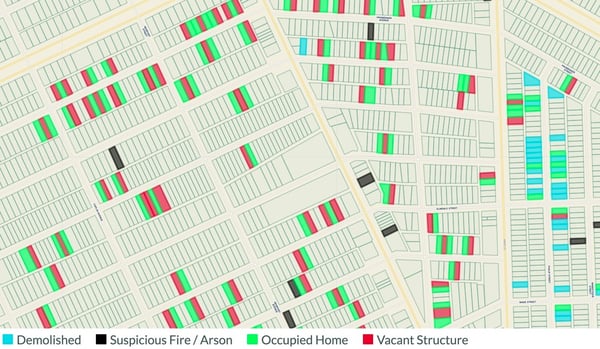 In the map below**, you can explore a part of the city experiencing a high concentration of suspicious fires and arsons this year -- the area bounded by I-94, I-96, and Dearborn to the West.

To navigate to other hot spots within the map, click the "Focus Areas" menu in the left sidebar in the map above and then the boundaries of the area you want to navigate to. Also, hot spots are linked to individually at the bottom of the post.

Additionally, for those coordinating Angel's Night activities by Council District, below are links to maps of each of the seven Council Districts -- all maps contain the information seen in the map above (vacant publicly owned structures, adjacent occupied homes, suspicious fires, and demolitions).

Each of the hot spots in the map above can be reached by using the links below:

Note that this map is not intended to be comprehensive, but to identify higher risk situations where occupied homes can be affected by nearby fires. Private vacant structures are also a significant risk factor when adjacent to an occupied home. To explore and identify additional vacancies across the city, refer to Motor City Mapping
.

If you navigate to neighborhoods where Hardest Hit Fund demolition money is available, you'll notice a clear effort to remove vacant structures from next to occupied homes. In the image below, blue properties are demolitions and green properties are occupied homes. A significant percentage of vacant structures, and potential fuel for arsonists, has been removed from the area by HHF demolitions. 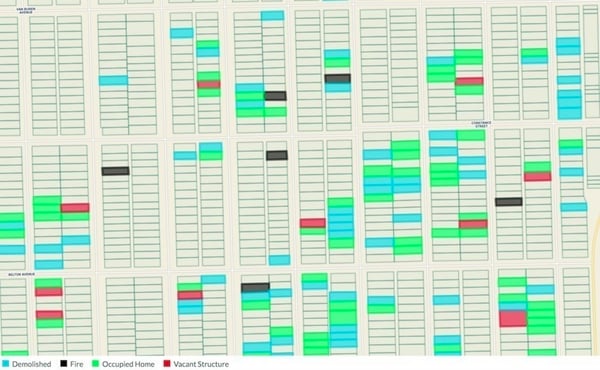 Demolitions on the east side of Warrendale

*- The night before Halloween - Devil's Night - has been associated with rampant arson across Detroit for decades. At its peak in 1984, over 800 fires were set in the three days before Halloween. By the mid-1990s, the annual destruction caused by Devil’s Night prompted community action and Angel’s Night was created in response. On nights leading up to Halloween, volunteers patrol neighborhoods and keep watch over houses in an effort to deter would-be vandals and arsonists. Angel's Night has been a huge success, credited with contributing to a significant decline in Halloween arson levels.

** This map includes demolitions up to September 1, 2015, and makes use of occupancy/vacancy data from Motor City Mapping -- always verify this information in the field, especially as many properties have not been resurveyed since the initial winter of 2013 / 2014 survey. Fire data is assembled as a part of Loveland's ongoing fire tracking in 2015.