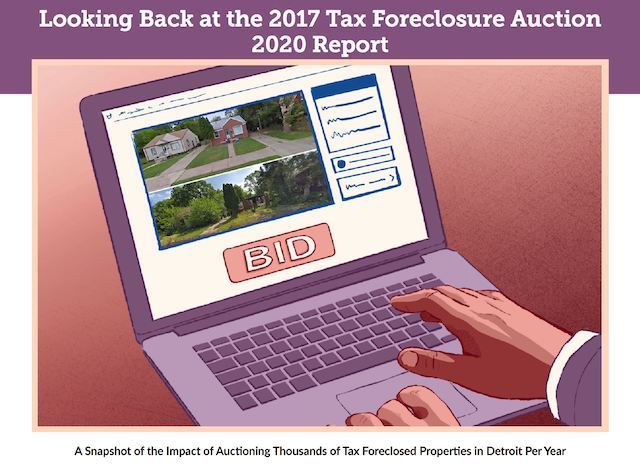 Looking Back at the 2017 Tax Foreclosure Auction: 2020 Report

What happened to the more than 6,000 properties that were involved in the 2017 Detroit Tax Foreclosure Auction? Detroit Action Commonwealth and Loveland teamed up to track these properties over time and understand more about how the auction process affects the city and its residents.

" On the day we were reviewing the final draft of this report, Wayne County Treasurer Eric Sabree announced that he would not foreclose or auction any properties in 2020 due to the coronavirus. From now until the moratorium ends, there is a need to review, revise, and rebuild Wayne County’s and Michigan’s tax foreclosure systems into something that truly works for people, properties, and communities. A policy originally intended to return vacant buildings to productive use quickly should never again separate thousands of people each year from their homes without regard for their situations, putting them at the mercy of speculators and investors. Tax foreclosure in Detroit has been an emergency in need of serious intervention for a long time. Our hope is that this report - along with the efforts, analyses, and direct actions of many others - contributes to realizing something far better on the other side. " - The Authors, 3/16/20

In 2017 more than 6,000 Detroit properties, including an estimated 2,725 occupied homes, were tax foreclosed and auctioned to the highest bidder by Wayne County. This report, prepared over the course of 2018 and 2019, looks back to see what has happened to these properties since then. Who bought them and where are they located? How many have gone vacant and how many became occupied? How many are headed back into tax foreclosure already? These and other questions are explored.