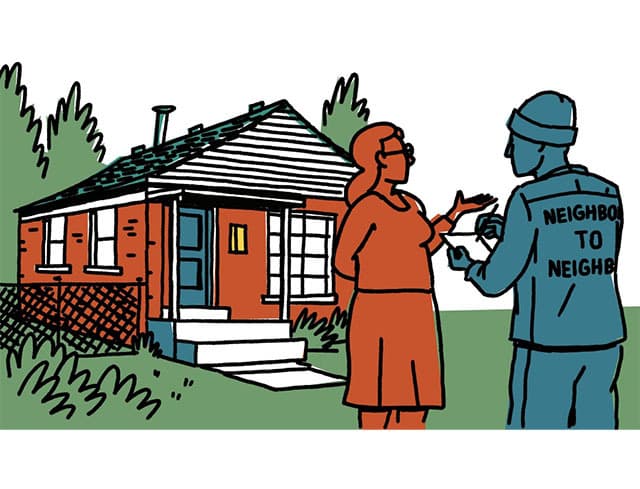 The Quicken Loans Community Fund, in partnership with the United Community Housing Coalition, sent teams of more than 400 Detroiters to visit every home at risk of tax foreclosure in the city of Detroit - 60,000 households. At each house, surveyors distributed foreclosure prevention information and gathered data using the Loveland survey app.

In 2013, the Obama administration convened the Detroit Blight Removal Task Force to chart a course to eliminate blight in Detroit. Co-chaired by Dan Gilbert, founder and Chairman of Quicken Loans, the Task Force first sought to understand the extent of blight in the city. To do so, it commissioned a project called Motor City Mapping. The effort brought together hundreds of Detroit residents, Quicken Loans team members, and other resources from the Quicken Loans Family of Companies and local tech firms, Loveland Technologies and Data-Driven Detroit, to evaluate the condition of all 385,000 properties in Detroit.

At the conclusion of the project, the Task Force issued a report that contained this warning about tax foreclosure in Detroit.

"Without intervention, county tax foreclosure will continue to sweep across the city until the inventory of foreclosable properties is exhausted. Speculators will buy cheap property and allow it to deteriorate. Despairing and frustrated residents will continue to walk away from their tax-foreclosed homes and from Detroit. Unscrupulous landlords will evict tenants and scrap their own properties. [...] Even the swiftest and most aggressive fight again today's blight will accomplish very little if we don't address the conditions that led to it."

In recent years, the Quicken Loans Community Fund has taken unprecedented steps to research and address the human cost of the tax foreclosure system. The report [below] is the product of an unprecedented community-led tax foreclosure prevention effort called Neighbor to Neighbor, a project inspired by the legacy and mission of Motor City Mapping.