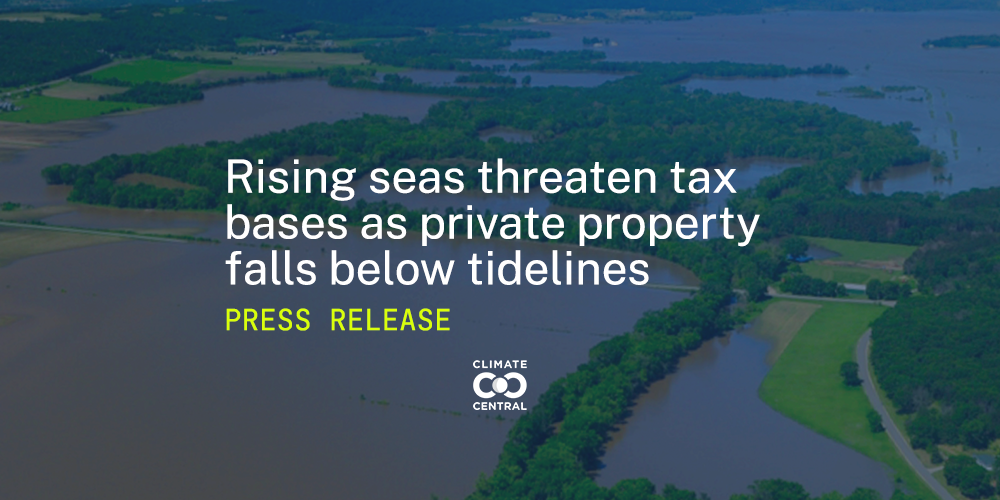 Princeton, NJ – September 8, 2022 – New analysis from Climate Central quantifies the risk of sea level rise to the tax bases of hundreds of coastal counties across 24 states and Washington, D.C. as more land falls beneath the tideline. By 2100 more than 1 million properties with a combined assessed value exceeding $108 billion are projected to be at least partly submerged at high tide.

Findings by county are detailed in more than 250 reports and a national summary including data on the acreage, buildings, number of properties, and assessed value projected to be at risk this century, by decade.

Sea level rise is shifting the high and low tide lines that coastal states use to define boundaries between public and private property. As these boundaries shift, private property will be lost to permanent coastal flooding. As property owners lose land and buildings, local property tax revenues may be lost, too—threatening a primary source of funding for schools and services provided by local governments.

By 2050, as many as 4.4 million acres are projected to fall below the high tide line nationwide. Four states—Louisiana, Florida, North Carolina, and Texas—account for 87% of the total area lost. And 30 counties are projected to lose more than 10% of their land to rising seas.

“By filling critical gaps in knowledge, these data can help to assess which communities are most vulnerable to the economic impacts of sea level rise,” Alice Hill, Senior Fellow for Energy and the Environment at the Council on Foreign Relations said. “Understanding where and when financial impacts will be most acute can inform action and support at the state and national level, assisting local efforts to maintain critical services and adapt to our changing climate.”

More than 48,000 properties are projected to be entirely below their states’ tidal boundary levels by 2050, with roughly 64,000 buildings at least partially below the high tide line. That projection rises sharply to nearly 300,000 buildings by 2100 as water levels reach land once considered safer to build on.

“We conducted this analysis on more than 51 million individual coastal properties’ public tax records. It is mostly individuals or families at risk of losing their homes or businesses to the sea,” Don Bain, senior advisor at Climate Central and project lead on this analysis said. “Big changes are coming to future shorelines that will impact the balance sheets of some property owners and counties and cities that depend on property taxes to fund schools and local government services.”

In addition to its peer-reviewed sea level rise modeling and mapping tools, Climate Central used data from Regrid.com--a land parcel and location context data company that has collected and standardized parcel boundaries and property assessment information across all 50 states and territories--which helped us locate and assess the value of at-risk properties. Because some counties' assessment data could not be fully included in this analysis, it underestimates the total value of at-risk property nationwide.

Climate Central is a non-advocacy, non-profit science and news organization providing authoritative information to help the public and policymakers make sound decisions about climate and energy.